Dementia is a general loss of mental abilities. It can include a loss of ability to think, reason, learn, and understand. To be considered dementia, these mental losses must be severe enough to interfere with day to day activities. Dementia must also have: 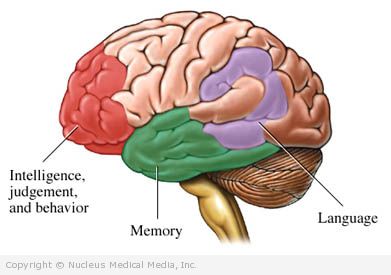 Causes of dementia include:

Risk factors for dementia include:

Symptoms often begin mildly. They often get more severe over time. Symptoms vary according to the cause of the dementia, but often include:

Your doctor may diagnose dementia through:

There are no blood tests or exams that can diagnose Alzheimer’s disease. Certain types of brain imaging such as a SPECT or a PET scan may aid in a diagnosis. Tests to rule out other causes of dementia and other medical conditions that may mimic dementia include:

Blood tests — to look for syphilis, vitamin B12, folate, thiamine (B1) thyroid, liver, and kidney function

The doctor will also check to see if you have depression. It can often present like dementia.

Currently, there are no treatments to cure many types of dementia. Some medication may help to decrease the symptoms of dementia or slow its course.

Two types of medicines that may be used to reduce the symptoms of Alzheimer’s disease include:

Treatments that are being studied include:

This type of support is critical for people with dementia. Behavioral and environmental support includes:

People with dementia often develop psychiatric symptoms. You may need appropriate treatment, such as:

Caring for a person with dementia is very difficult. Those providing care will need support. The http://www.alz.org/index.asp is an excellent resource for families and caregivers.

While the exact cause of dementia is not known, these steps may help to reduce your risk: