Astrocytoma is type of brain tumor. It is a malignant tumor, cancer. This type of tumor arises from small, star-shaped cells in the brain. They are called astrocytes. Astrocytes are one of several types of supporting cells in the brain. These type of cells are called glial cells. An astrocytoma is a subtype of the larger group of brain tumors called gliomas. 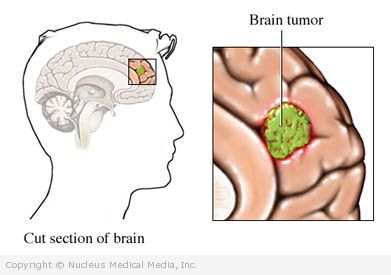 Astrocytoma is the most common form of glioma. It may occur anywhere in the brain. It is most commonly found in:

When an astrocytoma is diagnosed, the most important factors are:

These factors will determine the symptoms, prognosis, and treatment.

The exact cause is unknown. Some possible causes of brain tumors include:

Although the exact risk factors for astrocytomas have not been identified, some studies suggest the following risk factors increase your chance of this tumor:

The first symptoms of any brain tumor can be caused as the tumor grows. The growth can increase pressure in the brain. Symptoms may include:

Symptoms will vary, depending on the location of the tumor. For example:

The doctor will ask about your symptoms and medical history. A physical exam will be done. Tests may include:

A specialist will determine the grade of the tumor. Astrocytomas are graded from I to IV. These grades indicate the prognosis and rate of tumor growth.

Treatment is based on the location, size, and grade of the tumor. Treatment may include:

Surgery involves the removal of as much of the tumor as possible. If the tumor is high grade, surgery will often be followed by radiation or chemotherapy to help prevent further spread.

Radiation therapy involves the use of radiation to kill cancer cells or shrink the tumor. Radiation may be:

Chemotherapy is the use of drugs to kill cancer cells. It may be given in many forms including pill, injection, and via a catheter (IV or port). The drugs enter the bloodstream. They travel through the body killing mostly cancer cells. Some healthy cells are killed as well.

There are no guidelines because the exact cause is not known. It has been suggested that the electromagnetic waves emitted from high-tension wires or even cell phones may increase the risk of developing brain tumors. To date, there is no scientific evidence supporting this theory.