(Water on the Brain)

Hydrocephalus is too much fluid in the brain. The fluid is called cerebrospinal fluid (CSF). It is a clear fluid that normally surrounds both the spinal cord and the brain. You may be born with hydrocephalus or it develops after an injury or illness. 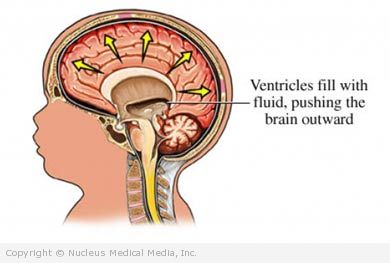 These problems with the CSF may be caused by:

Risk factors for hydrocephalus include:

Symptoms depend on the severity of the hydrocephalus. The extra CSF puts pressure on the brain. Symptoms may start out mild and become more severe as CSF pressure increases.

In babies symptoms may include:

Tests to examine the brain may include:

People who have risk factors for hydrocephalus should be carefully monitored. Immediate treatment might prevent long-term complications.

If you are diagnosed with hydrocephalus, follow your doctor’s instructions.

There are no known ways to prevent all cases of hydrocephalus. In general: