Retinitis pigmentosa (RP) is a group of inherited eye diseases that often leads to severe visual problems. The retina is a layer of light-sensitive tissue that lines the back of the eye. It converts visual images that we see into nerve impulses that it sends to the brain. Some types of RP are associated with other inherited conditions. This disorder is named for the irregular clumps of black pigment that usually occur in the retina with this disease. 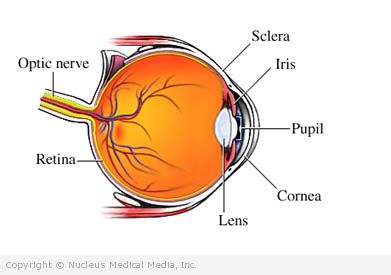 In most forms of retinitis pigmentosa, the rods die. Vision, thus, becomes impaired at night. The ability to see things off to the side while looking ahead also decreases. In some forms of RP, the cones are lost. In those cases, central and color vision suffers. Vision loss usually progresses over a period of many years.

Risk factors for RP include:

Loss of vision is usually first noted in childhood or early adulthood. The disease gradually worsens. After a number of years, vision loss may become severe. Symptoms vary, depending on the type of retinal cell that is affected. Both eyes often experience similar vision loss. It should be noted that RP is a slowly progressive disease over many years and that most patients never become completely blind. In fact, even though many people with RP are considered “legally blind,” it is only because they have very constricted fields of vision (poor peripheral vision). Some still maintain excellent central visual acuity. Overall, symptoms may include:

Blurry vision from cataracts may complicate RP later in the disease.

Your doctor will ask about your symptoms and medical history, and perform an eye exam. You may be referred to an eye specialist, such as an ophthalmologist.

Vision tests may include:

There is no effective treatment or cure for retinitis pigmentosa. Treatment aims to help you function with the vision that you have. Your doctor can counsel you about expected patterns of vision loss based on the type of RP you have. Recommendations include:

Although no direct link has been established, it is generally recommended that everybody, especially patients with disorders such as RP, wear dark UV-protected sunglasses and a wide-brimmed hat in bright, sunny conditions, such as while skiing or at the beach.

These may include the following:

Some community organizations offer classes to help people with vision loss adjust and learn how to use vision aids. If you are considered legally blind, you are entitled to many low-vision services at no cost.

Once RP has been inherited there are no known ways to prevent the disorder from occurring. If you have RP or have a family history of the disorder, you can talk to a genetic counselor when deciding to have children.