Parkinson’s disease (PD) is a movement disorder. The symptoms get worse over time and can include: 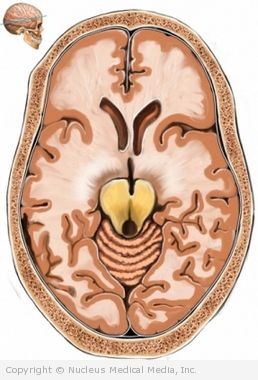 PD is caused by a loss of certain nerve cells in the brain. The loss of these cells cause a decreases in the amount of a brain chemical called dopamine. Low dopamine levels cause PD symptoms.

The brain cells may be lost because of genetic defects, the environment, or some combination of the two. A small amount of people with PD have an early onset form. This type is caused by an inherited gene defect.

Secondary PD has similar symptoms but is caused by several factors such as:

Factors that increase the chance of PD include:

Symptoms of PD begin mildly. They will worsen over time.

Tests to rule out other conditions may include:

Examples of medicines include:

Depression or hallucinations may also occur with PD and its treatment. Medicines may be prescribed to attempt to treat these conditions. The drugs may include:

Hip fractures are common in those with PD. Bisphosphonates are medications that may help reduce this risk.

Constipation, drooling, and lightheadedness when standing are common and may improve with medications or other treatments.

Different brain operations are available, and many more are being researched including:

Therapy can improve muscle tone, strength, and balance. It will include exercises and stretches.

Consider joining a support group with other people with PD. It will help to learn how others are learning to live with the challenges of PD.

If you are diagnosed with PD, follow your doctor’s instructions.

There are no guidelines for preventing PD.