A nose fracture is a break in the bones of the nose. 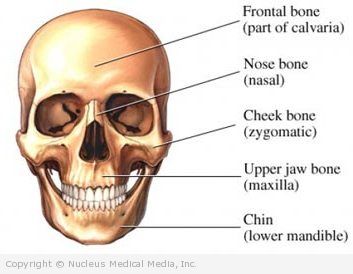 A broken nose is caused by a blunt, hard blow to the nose. It often occurs along with injuries to other parts of the nose and face.

A risk factor is something that increases your chance of getting a disease, condition, or injury. Risk factors for a nose fracture include:

Symptoms of a broken nose include:

The doctor will ask about your symptoms and how the injury occurred, and will examine your nose and face for:

Apply ice or a cold pack to your nose for 15-20 minutes, several times a day for several days. This helps reduce pain and swelling. Wrap the ice or cold pack in a towel. Do not apply the ice directly to your skin.

Surgery may be needed to set the fracture if:

If you are diagnosed with a nose fracture, follow your doctor’s instructions.

Broken noses may not always be preventable. To reduce your risk of a broken nose: