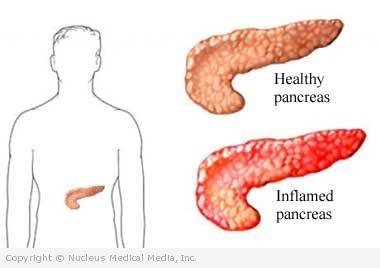 Causes of pancreatitis include:

A risk factor is something that increases your chance of getting a disease or condition. Risk factors for pancreatitis include:

Other tests may include:

Treatment for acute pancreatitis depends on the severity of the attack. Hospitalization may be necessary. The main goal is to rest the pancreas. In mild cases, this means you may not have food for three to four days. In severe cases, you may not be able to have food for three to six weeks. You will likely need strong pain medicine during this time.

Treatment may also include:

The goals of treatment for chronic pancreatitis are to relieve pain and manage nutritional and metabolic problems. Specific steps include:

Surgery and/or ERCP may be needed to:

If you are diagnosed with pancreatitis, follow your doctor’s instructions.