Gallbladder cancer is a disease in which cancer cells grow in the gallbladder. This is a relatively rare form of cancer. The gallbladder is a small pear-shaped organ. It sits beneath the liver and stores bile until it is needed by the digestive system. Bile is a greenish-yellow digestive fluid produced by the liver that helps in digesting fat.

Cancer occurs when cells in the body (in this case gallbladder cells) divide without control or order. Normally, cells divide in a regulated manner. If cells keep dividing uncontrollably when new cells are not needed, a mass of tissue forms, called a growth or tumor. The term cancer refers to malignant tumors, which can invade nearby tissue and spread to other parts of the body. A benign tumor does not invade nor spread. 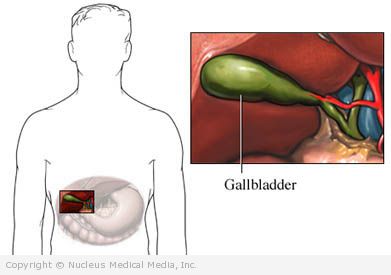 The exact cause of gallbladder cancer is unknown.

In addition, women are more likely to get gallbladder cancer than men. It is also more common in older individuals.

Gallbladder cancer often shows no symptoms in its early stages. As the disease progresses, symptoms associated with bile obstruction often develop. These include:

Other symptoms may include:

Gallbladder cancer is often hard to diagnose because:

Gallbladder cancer is sometimes discovered during abdominal surgery for another reason.

A biopsy, which is the removal of a sample of tissue for testing, must be done to definitively diagnose gallbladder cancer. This often requires open surgery. Many times gallbladder cancer is found by accident. The patient is often taken to surgery because of a gallbladder “attack.” At surgery, the surgeon may find cancer or it may only be found once the pathologist has sliced the entire gallbladder into very small slices.

Once gallbladder cancer is found, staging tests are performed to find out if the cancer has spread and, if so, to what extent. Treatment depends on the stage of the cancer. For advanced cancers, treatment is done only to help relieve symptoms. Treatments include:

Surgical removal of the gallbladder is called cholecystectomy. Part of the liver and lymph nodes near the gallbladder may also be removed. In some cases, surgery is done to relieve symptoms by opening obstructed bile ducts. ERCP may also be used for this purpose.

Radiation therapy uses radiation to kill cancer cells and shrink tumors. Radiation is most often administered from a source outside the body.

Chemotherapy is the use of drugs to kill cancer cells. The drugs enter the bloodstream and travel through the body killing mostly cancer cells, but also some healthy cells. Chemotherapy is not considered curative for gallbladder cancer, but may relieve symptoms in some patients.

CMT is a term gaining popularity and meaning several treatments at once or in succession. Although no one has shown that chemotherapy and radiation therapy at the same time are better than radiation therapy alone in the treatment of gallbladder cancer, CMT is better with many other kinds of cancers.