Laryngeal cancer is a disease in which cancer cells grow in the larynx. The larynx is a tube-shaped organ inside the neck that lies between the throat and the windpipe. Its main function is to produce sound for speaking.

Cancer occurs when cells in the body (in this case laryngeal cells) divide without control or order. Normally, cells divide in a regulated manner. If cells keep dividing uncontrollably when new cells are not needed, a mass of tissue forms, called a growth or tumor. The term cancer refers to malignant tumors, which can invade nearby tissues and can spread to other parts of the body. A benign tumor does not invade or spread. 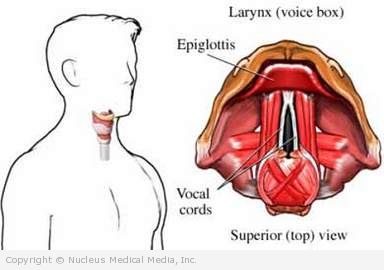 The cause of laryngeal cancer is unknown.

These symptoms may also be caused by other, less serious health conditions. If you are experiencing these symptoms, see your healthcare provider.

Your doctor will ask about your symptoms and medical history, and perform a physical exam. Tests may include:

Once laryngeal cancer is found, staging tests are performed to find out if the cancer has spread and, if so, to what extent. Treatment depends on the stage of the cancer. For early stage laryngeal cancer, either surgery or radiation alone is the most common and appropriate therapies offered. For more advanced disease, either radiation (with chemotherapy) or surgery followed by radiation is the most common treatment given.

Surgery requires removal of a cancerous tumor and nearby tissue, and possibly nearby lymph nodes. Surgeries for laryngeal cancer include:

Chemotherapy is the use of drugs to kill cancer cells. This form of treatment may be given in many forms including pill, injection, and catheter. The drugs enter the bloodstream and travel through the body killing mostly cancer cells, but also some healthy cells. Chemotherapy may be used to reduce the size of a particularly large cancer.