The liver is located in the right side of the abdomen. It stores and metabolizes nutrients, and filters and stores blood. Liver cancer is the growth of cancer cells in the liver. 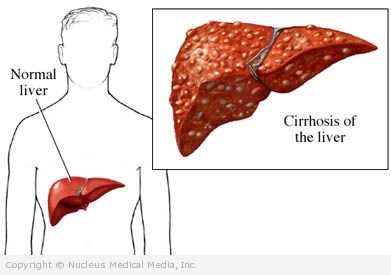 The cause of liver cancer is not known. Research shows that certain risk factors are associated with the disease.

Factors that may increase you chance of liver cancer include:

Symptoms of liver cancer in the early stages are vague. They often go unnoticed.

Liver cancer can cause the following symptoms:

These may also be caused by other, less serious health conditions. See a doctor if you have these symptoms.

Your doctor will ask about your symptoms and medical history. A physical exam will be done.

Once liver cancer is found, staging tests are done. This will help find out if the cancer has spread and, if so, to what extent. Surgery is the only curative procedure in liver cancer. Chemotherapy and radiation therapy can reduce symptoms associated with the cancer. They are not considered curative by themselves.

To reduce your risk of getting liver cancer: