Fibroids are benign (noncancerous) growths in the wall of the uterus. The uterus is the reproductive organ where a fetus grows. Fibroids often grow into the uterine cavity. In rare cases, they may protrude from the uterus toward nearby organs. Fibroids may be very small or may grow to eight or more inches in diameter. Usually more than one fibroid is present. 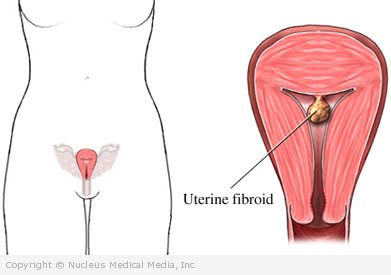 The cause of fibroids is unknown. Genetics and changes in substances that control blood vessel growth may make some women prone to fibroids. Female reproductive hormones stimulate fibroid growth. Fibroids grow larger during pregnancy then shrink after childbirth. Fibroids become less of a problem after menopause. But, symptoms may return with hormone replacement therapy.

These risk factors increase your chance of developing fibroids:

Symptoms range from none at all to mild or severe. This depends on the size and location of the growths.

Iron-deficiency anemia may develop if bleeding is heavy.

Doctors find most fibroids during routine pelvic exams. An confirms the diagnosis. A may be done to obtain clearer images. A

To confirm the diagnosis, your doctor may order other imaging tests or procedures, such as:

Most women with fibroids have no symptoms and do not need treatment. Your doctor may recommend “watchful waiting.” This is done to monitor the size and growth of the fibroids at regular intervals using ultrasound.

Hormone medicines, which decrease estrogen levels, are an option if you are not trying to become pregnant. The drugs shrink fibroids. The drugs also lessen the pain by decreasing the supply of estrogen to the uterus. However, fibroids can return once you stop taking the drugs. These drugs are often used to reduce fibroid size prior to surgery.

Surgery is considered if:

If you are diagnosed with uterine fibroids, follow your doctor’s instructions.

There are no guidelines for preventing fibroids.