(Cancer of the Cervix)

Cervical cancer is a disease in which cancer cells grow in the cervix. The cervix is the lower, narrow part of the uterus (womb) that connects the uterus with the vagina.

Cancer occurs when cells in the body (in this case, epithelial cervix cells lining the cervical canal) divide without control or order. Normally, cells divide in a regulated manner. If cells keep dividing uncontrollably, a mass of tissue forms, called a growth or tumor. The term cancer refers to malignant tumors, which can invade nearby tissue and spread to other parts of the body. A benign tumor does not invade or spread. 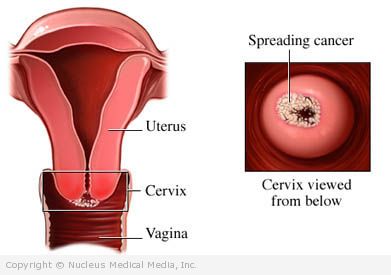 Research suggests that some sexually transmitted viruses (eg, human papilloma virus) can cause the nuclei in cervical cells to begin the changes that can lead to cancer.

Scientists believe several risk factors act together. These include:

Symptoms usually do not appear until the abnormal cells become cancerous. They invade nearby tissue. When this happens, the most common symptom is abnormal bleeding, which may include:

These symptoms may also be caused by other, less serious health conditions. If you experience these symptoms, see you doctor.

If you are a healthy woman, many professional health organizations offer these recommendations for screening:

Note: You will need to have Pap tests done more often if you have abnormal results or certain conditions, like a suppressed immune system or a history of cervical dysplasia or cervical cancer. Talk to your doctor about the right screening schedule for you.

Tests to diagnose cervical cancer include:

Once cervical cancer is found, further tests are performed to find out if the cancer has spread beyond the cervix, and, if so, to what extent. This process is called staging. Treatment depends on the stage of the cancer.

The cancerous tumor, nearby tissue, and possibly nearby lymph nodes may be removed. The doctor may remove only the tumor and surrounding normal tissue if the tumor is very localized within the cervix. In some cases, a hysterectomy is necessary.

If the cancer is at a high stage, more tissue must be removed. Sometimes the ovaries and fallopian tubes also are removed.

Radiation therapy is the use of radiation to kill cancer cells and shrink tumors. Radiation may be given in two ways:

Chemotherapy is the use of toxic drugs to kill cancer cells. It may be given in many forms including: pill, injection, and via a catheter. The drugs enter the bloodstream and travel through the body. It kills mostly cancer cells, but also some healthy cells. Chemotherapy alone rarely cures cervical cancer. It may be used in addition to surgery and/or radiation.

This therapy may also be used to help control pain and bleeding when a cure is no longer possible.

If you are diagnosed with cervical cancer, follow your doctor’s instructions.

Finding and treating precancerous tissue in the cervix is the most effective way to prevent cervical cancer. Talk to your doctor about when you should have pelvic exams and Pap tests done. Another effective approach is to reduce your risk of exposure to the HPV virus. There are currently two methods to accomplish this: