In general, these different types can be divided into two main groups:

These cancers are different from Hodgkin’s lymphoma.

Cancer occurs when cells in the body divide out of control or order. If cells keep dividing, a mass of tissue forms. These are called growths or tumors. If the tumor is malignant, it is cancer. They can invade nearby tissue and spread to other parts of the body. 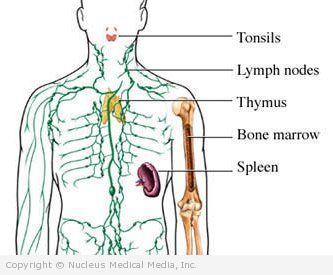 The cause of non-Hodgkin’s lymphoma is unknown. Mutations in DNA that occur after birth may be related to this cancer. These mutations can occur as a result of exposure to radiation or cancer causing chemicals. It may also occur with age or for no apparent reason.

Most people who develop non-Hodgkin’s lymphoma have no known risk factors, but the following factors may increase your chance of developing this condition:

Your doctor will ask about your symptoms and medical history. A physical exam will be done. It will include an exam of your lymph nodes. Most enlarged or swollen lymph nodes result from an infection. If infection is suspected, you may be given medication and told to return.

If swelling persists, your doctor may order more tests. They will help to determine whether there is cancer and what type of cancer is present.

Tests may include the following:

Treatments depend on the stage of the cancer and its type. The type is determined in part by microscopic exam and other studies. Talk with your doctor about the best plan for you. Treatment options include:

For some indolent lymphomas, no treatment may be needed for some time. Treatment is needed if the tumor begins to cause symptoms such as:

Treatment may also be need if the tumor becomes too large to tolerate or shows signs of becoming aggressive.

Chemotherapy involves the use of drugs to kill cancer cells. It may be given in many forms. This may include pills, injection, and via a catheter. The drugs enter the bloodstream. It travels through the body. It will kill mostly cancer cells. Some healthy cells may also be killed.

Radiation is directed at the tumor from a source outside the body to kill the cancer cells.

A patient may use their own bone marrow. In this case, bone marrow is removed, treated, and frozen. Large doses of chemotherapy and/or radiation therapy are then applied to kill the cancer cells. After treatment, the bone marrow is replaced via a vein.

Marrow may also be donated from a healthy donor.

Stem cells are very immature cells that produce blood cells. They are removed from circulating blood before chemotherapy or radiation treatment. These cells are then replaced after treatment. The cells can then develop new healthy cells.

These medications or substances are made by the body. They increase or restore the body’s natural defenses against cancer.

One type of biological therapy, interferons, interferes with the division of cancer cells and can slow tumor growth. Interferons are produced by the body. They can also be made in the lab to treat cancer and other diseases.

Sometimes a drug or antibody that is directed at the lymphoma is linked to a radioactive substance. It will deliver a focused dose of radiation to the tumor.

There are no guidelines for preventing non-Hodgkin’s lymphoma. To reduce your risk, avoid exposure to chemicals such as herbicides, pesticides, and benzene. If you have celiac disease (gluten intolerance), maintain your gluten-free diet. This diet will minimize the stimulation of your immune system by exposure to gluten.