Pancreatic cancer is the growth of cancer cells in the pancreas. The pancreas is a long, flattened pear-shaped organ in the abdomen. It makes digestive enzymes and hormones including insulin. 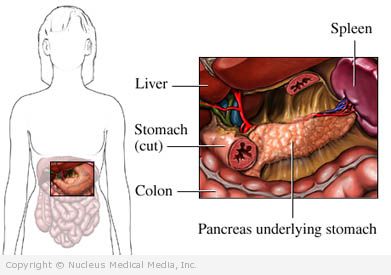 The cause is unknown. Research shows that certain risk factors are associated with the disease.

Factors that increase your risk of developing pancreatic cancer include:

Pancreatic cancer does not cause symptoms in its early stages. The cancer may grow for some time before it causes symptoms. When symptoms do appear, they may be very vague. In many cases, the cancer has spread outside the pancreas by the time it is discovered.

Symptoms will vary depending on the location and size of the tumor. Symptoms include:

These symptoms may also be caused by other, less serious health conditions. Anyone experiencing these symptoms should see a doctor.

The doctor will ask about your symptoms and medical history. A physical exam may be done. The doctor may order blood and urine tests, as well as check for hidden blood in bowel movements.

Once cancer of the pancreas is found, staging tests are performed. These test help to find out if the cancer has spread and, if so, to what extent. Treatments for pancreatic cancer depend on the stage of the cancer.

Removal of the cancerous tumor and nearby tissue may be done. Nearby lymph nodes may also need to be removed. In pancreatic cancer, surgery may also be performed to relieve symptoms. Surgeries include:

This is the use of radiation to kill cancer cells and shrink tumors. Radiation may be:

Chemotherapy is the use of drugs to kill cancer cells. It may be given in many forms including pill, injection, and via a catheter. The drugs enter the bloodstream. They travel through the body killing mostly cancer cells. Some healthy cells are killed as well.

The use of medications or substances made by the body. They can increase or restore the body’s natural defenses against cancer. It is also called biologic response modifier (BRM) therapy.

Most times, pancreatic cancer is discovered at an advanced stage. Surgery may not be appropriate in this case. If surgery cannot be done, then chemotherapy and radiation are offered together to prolong survival.

Surgery would be appropriate in only 25% of patients with this disease in the early stage. In these cases, the patient would benefit from surgery. After surgery, follow-up chemotherapy and radiation therapy have been found to prolong survival in some cases.

If you think you are at risk for pancreatic cancer, talk to your doctor about ways to reduce your risk, such as:

CT Scan of the abdomen