Intussusception is a very serious type of bowel obstruction. It occurs in up to 4 in 1000 live births. The bowel (also called intestine) is shaped like a long tube. Intussusception occurs when a part of the bowel “telescopes” in on itself and is trapped by an adjacent portion of the small or large intestine. This causes swelling and obstruction, cutting off the blood supply to the intestine. 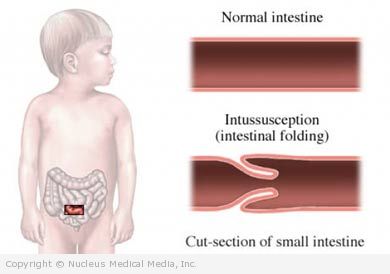 In many cases, there is no known cause for intussusception. However, intussusception may sometimes occur as a complication of some medical conditions, including:

The initial symptoms may include:

Intussusception cuts off the blood supply to the bowel. If this is not treated quickly, it can lead to bowel gangrene. Gangrene can cause tissue in the intestinal wall to die. This may lead to:

If not treated quickly, peritonitis can lead to death.

In many cases, giving an air enema will correct intussusception. Air enema is preferred over water-soluble contrast or barium enema. This is often the preferred treatment when intussusception occurs in infancy. However, the test may occasionally cause a perforation to occur in the bowel. No form of enema should be done if the doctors know the bowel is perforated.

Surgery may be required to release the trapped portion of the bowel and to clear the obstruction. If any bowel tissue has died due to gangrene, that part of the bowel may need to be removed.

After any treatment, intussusception may recur.

Antibiotics may be administered and a nasogastric tube placed prior to attempted reduction.

If you are diagnosed with intussusception, follow your doctor’s instructions.

There are no guidelines for preventing intussusception because the cause is unknown.