Heartburn is a burning sensation in the lower chest. It is the main symptom of gastroesophageal reflux disease (GERD). 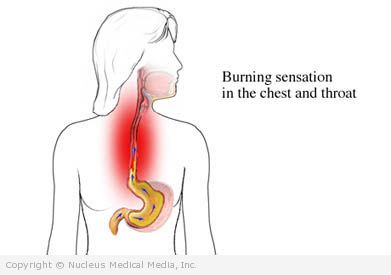 Other causes of GERD include conditions that:

Genetics may also play a role in developing GERD.

Heartburn symptoms usually occur after overeating or lying down after a big meal. The symptoms may last for a few minutes or a few hours.

The severity of symptoms depends on the:

Other symptoms and complications of reflux include:

If reflux persists, the acid can damage the esophagus. Symptoms of esophageal damage include:

It is common to experience heartburn occasionally. But, if you have frequent episodes of heartburn (like twice a week), make an appointment to see your doctor. Also, call your doctor if you have any symptoms that are listed as complications of reflux, especially symptoms of esophageal damage.

When Should I Call for Medical Help Immediately?

Heartburn and chest pain due to a heart attack can feel similar. Get medical help right away if you have:

If you are not sure of the cause of any pain in your chest, call for emergency help right away.

Treatment aims to decrease the number of episodes of heartburn and its complications. This focuses on:

Lifestyle changes may include:

If symptoms are severe and you cannot tolerate the medicines, surgery may be an option.

The most common surgery for heartburn is fundoplication. The doctor wraps the stomach around the esophagus. This creates pressure on the muscle at the opening to the stomach. If you have a hiatal hernia, it can also be repaired at this time.

In some cases, the surgery can be done with smaller incisions, called laparoscopy.

An advantage of endoscopic techniques is that they do not involve incisions in the skin. Instead, the doctor inserts a lighted device called an endoscope through the mouth and down the esophagus to reach the first part of the stomach. Through the endoscope, the doctor can perform one of a variety of procedures that decreases the backward flow of stomach acid into the esophagus, including transoral incisionless fundoplication (TIF).

If surgery or endoscopy is successful, you may not need to take heartburn medicines anymore.

BE = This therapy has the best evidence available showing that it is effective.