Sleep apnea is a condition in which breathing is repeatedly interrupted during sleep. The time period for which the breathing stops or decreases is usually between 10 and 30 seconds. When these episodes occur repeatedly, sleep apnea can seriously disrupt the quality of sleep. 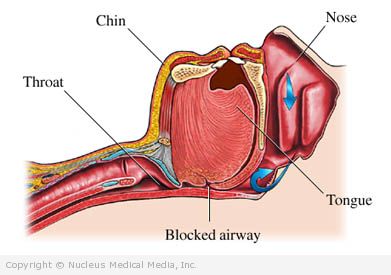 There are three types of respiratory events:

These factors increase your chance of developing sleep apnea. Tell your doctor if you have any of these risk factors:

People with chronic untreated sleep apnea may be at risk for:

This test helps detect the presence and severity of sleep apnea. During sleep, it measures your:

In addition to sleep studies, your doctor may order:

There are a number of treatment options for sleep apnea, including:

Continuous positive airway pressure (CPAP) entails wearing a mask over your nose and/or mouth during sleep. An air blower forces enough constant and continuous air through your air passages to prevent the tissues from collapsing and blocking the airway. In some cases, dental appliances that help keep the tongue or jaw in a more forward position may help.

In some cases, surgery may be recommended. It is most often beneficial in pediatric patients.

Types of surgery that may be done to treat severe cases of sleep apnea include:

Bariatric surgery may help with weight loss in some people who are obese. This surgery may reduce many of the complications that are related to obesity, including sleep apnea.

Only used in central apnea, acetazolamide (Diamox) may help improve the ability to regulate breathing. Overall, there is not a lot of evidence to support the use of medicines to treat sleep apnea.

Supplemental oxygen may be given if blood levels of oxygen fall too low during sleep, even after opening the airway.

You may be able to prevent the onset of sleep apnea by maintaining a healthy weight. Avoid alcohol, nicotine, and sedatives, which may contribute to airway obstruction.