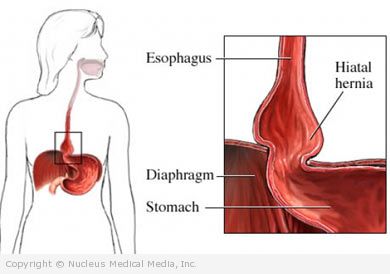 Upsets in the balance of stomach acid and digestive juices can lead to an ulcer. This can be caused by:

Not all people that take NSAIDs or with H pylori infection develop ulcers.

Risk factors for ulcer from H pylori infection include:

Risk factors for ulcer from anti-inflammatory drugs include:

Ulcers can cause serious problems and severe abdominal pain. Problems include:

The doctor will ask about your symptoms and medical history. A physical exam will be done. Tell your doctor about all medication you are taking.

The goal is to remove the source of the problem and heal the ulcer. Gastric ulcers may take longer to heal.

Some medications block or reduce acid production. Some coat the ulcer to protect it. If H pylori caused the ulcer, you will need to take a combination of drugs to kill the bacteria. This usually consists of antibiotics and a proton-pump inhibitor. It is very important to take these drugs as directed. The doctor may order tests 6-12 months after treatment. This is done to check that the bacteria are gone.

You may need surgery if you have bleeding, a perforation, or an obstruction. Surgical options include:

This may be done to stop bleeding. A thin, lighted tube is inserted down the throat into the stomach or intestine. Then, heat, electricity, epinephrine, or a substance called “fibrin glue” can be applied to the area. This should stop the blood flow.

Vagotomy is the cutting of parts of the vagus nerve. This procedure can greatly reduce acid production. Cutting the entire nerve can also create problems with stomach. In this case, drainage must be created. Drainage may be done with one of the following:

Two other forms of vagotomy include:

To decrease the risk of ulcer from H pylori infection:

To decrease the risk of ulcer from NSAIDs: