The appendix is a small, tube-like organ that hangs from the large intestine. Appendicitis is inflammation of the appendix. The appendix has no known function. 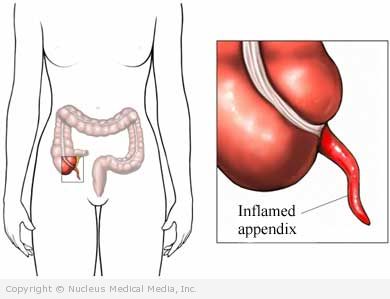 Appendicitis usually occurs when the appendix becomes inflamed. This can be caused by something trapped in the appendix, such as:

Risk factors that can increase your chance of developing appendicitis include:

Symptoms usually happen quickly. Pain usually increases during a 6-12 hour period. Patients may have some or all of the following symptoms:

If the appendix ruptures, symptoms include:

Note: Symptoms may be different in infants, children, pregnant women, and the elderly.

Get medical help right away if you have severe pain in the abdomen. Appendicitis can be hard to diagnose. Symptoms vary and can be similar to symptoms of other diseases.

The doctor will ask about your symptoms and medical history. A physical exam will be done, including:

Other tests to determine the cause of your pain may include:

Appendicitis is treated by surgically removing the appendix as soon as possible. Sometimes the diagnosis is not certain. The doctor will carefully monitor your condition for 6-12 hours before operating. You will also be given antibiotics to fight infection.

Follow your doctor’s instructions if you are diagnosed with appendicitis.

There are no guidelines to prevent appendicitis. It starts quickly and the cause is usually unknown. Get medical care right away for severe abdominal pain. It will decrease the risk of rupture.