Hemophilia is a group of bleeding disorders. It is caused by low amounts of specific clotting factors. These factors help to stop bleeding.

The most common types of hemophilia are:

Hemophilia is caused by a faulty gene inherited from one or both parent. It is called an inherited sex-linked recessive gene. The gene is located on the X chromosome.

It is possible for a female to have hemophilia. For this to happen she must inherit the faulty gene from both her mother and her father.

Males carry only one X chromosome. If they get the faulty gene the disease will develop. 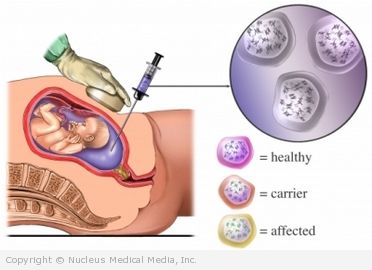 Factors that increase your chance of hemophilia include:

The severity of symptoms can vary. Severe forms become apparent early on. Bleeding is the main symptom. It may be noticed if an infant is circumcised. Additional bleeding problems appear when the infant becomes mobile.

Bleeding can be caused by an injury. It can produce excessive bruising after a minor trauma or cut. It can also cause bleeding after extraction of teeth. Bleeding into joints is a common sign. This is called hemarthrosis. Intestinal bleeding may produce bloody stools. If it occurs in the small intestine it will cause black, tarry stools.

Mild cases may go unnoticed until later in life. Then they occur in response to surgery or trauma.

Symptoms for Hemophilia A and B may include:

Symptoms for Hemophilia B may include:

Coagulation studies look at the ability of the blood to clot. These studies involve many tests. They are done if the person tested is the first one in the family with the disorder. Once identified, other family members will need less testing for a diagnosis.

People with hemophilia and their families can be taught to administer blood factor concentrate at home at the first signs of bleeding. This can help prevent a crisis. People with severe forms of the disease may need regular infusions.

Some patients develop an inhibitor to a particular factor. This may require treatment with other clotting factors.

The hepatitis B vaccine is important. There is an increased risk of exposure to hepatitis with frequent infusions of blood products.

Mild hemophilia may be treated with an infusion of medicine. This infusion causes the release of blood factor concentrate. The factor is stored within the body on the lining of blood vessels.

Medicines that may be used for infusion include:

Genetic counselors can make a detailed family history. They will discuss risks and available testing options.