HIV is a virus that attacks white blood cells called helper T cells (CD4). These cells are part of the immune system. They fight off infections and disease. As a result, an HIV infection can leave you vulnerable to severe illnesses.

AIDS is a late stage of HIV infection. It reflects severe damage to the immune system. One or more opportunistic infections will also likely exist. This is a type of infection that only occurs in people with compromised immune systems.

The HIV virus is spread through contact with HIV-infected blood or other body fluids. This includes semen, vaginal fluid, and breast milk. 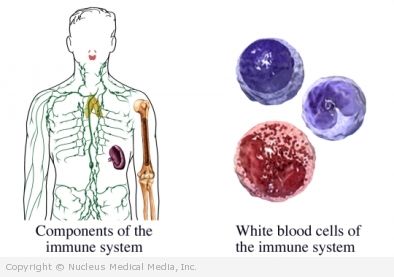 HIV is spread through:

Rarely, HIV can be spread through:

Factors that increase your chance of getting HIV include:

The risk factor for AIDS is having HIV.

HIV may not cause symptoms for a number of years.

Early symptoms may appear a month or two after becoming infected. They may last a couple of weeks. These include:

After these initial symptoms pass, there may be no symptoms for months to years. Then, the following symptoms may occur over the course of 1-3 years:

The doctor will ask about your symptoms, medical history, and risk factors. A physical exam will be done. Your doctor may order tests, such as:

Medicines can prevent, delay, or control the development of AIDS in many people infected with HIV.

These drugs are often given in combination. They are often referred to as AIDS cocktails. They include:

People who have developed AIDS are treated with numerous drugs that help prevent:

To prevent becoming infected with HIV:

To prevent spreading HIV to others if you are HIV infected: