Rabies is a viral infection. It infects the brain and spine. Rabies is almost always fatal unless treated before symptoms appear. 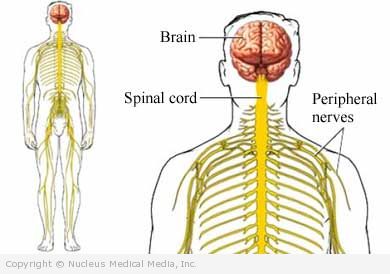 Rabies is caused by a virus. It is found in infected, warm-blooded animals. Animals that commonly carry the virus include:

The virus is in the saliva, brain, or nerve tissue of infected animals. Humans most often contract rabies through a bite or scratch from an infected animal. The virus may also be passed if infected tissue comes into contact with human mucus membranes. This tissue is found in the eyes, nose, or mouth.

The only risk factor is contact with an infected animal.

In most parts of the US any contact with a bat may be considered a rabies risk factor. Seek medical advice if you find a bat anywhere inside your home.

Symptoms often start within 3-7 weeks. In some cases, the virus can incubate up to one or more years.

Death usually occurs within a week after symptoms appear.

Symptoms in humans may include:

Symptoms in animals may include:

If you think you have been exposed to rabies:

If the animal is available and appears well, it will be kept under observation for 10 days. If no symptoms develop, you are not at risk for rabies. If the animal is sick or dead, its head will be shipped to a special facility. There the brain will be examined for the presence of the virus. In the meantime, you may be advised to begin treatment.

If the animal is unavailable, treatment may be given. This could depend on:

If an animal has bitten you, immediately do the following:

If it is likely that you have been exposed to rabies, your doctor will recommend:

When needed, this is given within 24 hours after exposure. It contains large amounts of antibodies to the rabies virus. In most cases, half of the dose should be injected into the wound and surrounding tissue. The rest is given into a muscle. If you have previously received rabies vaccine, you may not need the HRIG shot.

Your doctor will give you 4-5 shots of one of these vaccines. They will be given over the next four weeks. The vaccine will be injected into your upper arm muscles.

Certain medicine may interfere with your response to the rabies vaccine. Be sure to tell your doctor about all medicine or herbs that you take on a regular basis.