Nosebleed refers to blood flowing from the nose or nasal passage. There are two types of nosebleeds: 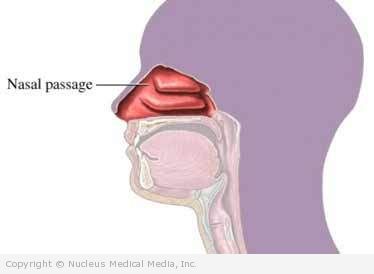 Factors that may increase the risk of nosebleeds include:

Nosebleed symptoms depend on where in the nose the bleeding begins, for example:

Call your doctor if:

The doctor will ask about your symptoms and medical history and perform a physical exam.

Your doctor may want to do certain tests, such as:

For an anterior nosebleed, the doctor will place a compress soaked in a medicine that constricts or shrinks the blood vessel and reduces the pain. Pressure will be applied by pinching the nostrils together. The doctor may pack the area with gauze. In more severe cases, the doctor may cauterize, or seal off, a blood vessel that does not clot on its own.

A posterior nosebleed may require packing the nostril or inserting and inflating a special balloon that applies pressure on the area. If all medical attempts to control bleeding fail, surgery may be needed.

If you are diagnosed with a nosebleed, follow your doctor’s instructions.

To reduce the chance of getting a nosebleed: