This type is caused by inherited genes. These genes cause the stomach and intestines to absorb too much iron. It is the most common genetic disorder in the United States.

This type results from treatments or diseases that cause iron to build up in the body. This may include:

If found early HH is easily treated. Untreated HH can lead to severe organ damage. Excess iron builds up in the cells of the liver, heart, pancreas, joints, and pituitary gland. This leads to diseases such as cirrhosis of the liver, liver cancer, diabetes, heart disease, and joint disease. 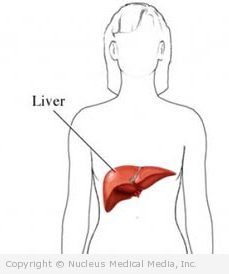 HH is caused by a genetic defect. It is passed down through autosomal recessive inheritance. This means a child who inherits two genes,one from each parent, is very likely to develop HH. However, not all people who have two copies of the gene develop signs and symptoms of HH.

Factors that increase your chance for developing HH include:

Many people have no symptoms when they are diagnosed. However, when they occur, symptoms may include:

If the disease is not treated early, iron may build up in body tissues. This may eventually lead to serious problems such as:

The doctor will ask about your symptoms. A medical history will be taken. A physical exam will be done.

Treatment is simple, inexpensive, and safe.

The first step is to rid the body of excess iron. The process is called phlebotomy. This means removing blood. The schedule will depend on how severe the iron overload is. A pint of blood will be taken once or twice a week for several months to a year. It may last longer. Once iron levels return to normal, maintenance therapy is given. A pint of blood is given every 2 to 4 months for life. Some people may need it more often. Female patients may need to increase their schedule after menopause.

These include steps to reduce the amount of iron you consume and/or absorb, and to help protect your liver:

You may need to be treated for other conditions that have developed. Hemochromatosis can cause these to develop:

This condition is often undiagnosed and untreated. It is considered rare. Doctors may not think to test for it. The initial symptoms can be vague. They can also mimic many other diseases. Doctors may also focus on the conditions caused by HH rather than the underlying iron problem. If the iron overload is found and treated before organ damage, a person can live a normal, healthy life. Screening for hemochromatosis is not a routine part of medical care. Researchers and public health officials do have some suggestions:

A genetic counselor can help you review your family history, determine your specific risks, and review the appropriate testing.