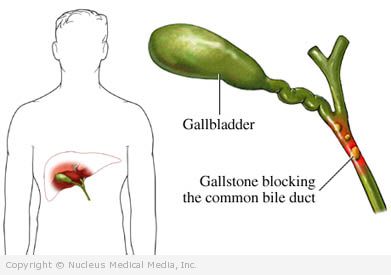 The gallbladder stores bile. This fluid is produced in the liver and used in the small intestine to digest fat. Bile contains cholesterol, water, bilirubin, and bile salts.

Gallstones can form under the following conditions:

These factors increase your chance of developing gallstones. Tell your doctor if you have any of these risk factors:

Many people have gallstones without symptoms, called “silent gallstones.” In some cases, these are treated.

Gallstones may cause pain in the upper abdomen. This is sometimes called an attack because it begins suddenly, often after a fatty meal. The pain is severe and may last for 30 minutes or several hours.

If you have the following symptoms, see your doctor right away:

The doctor will ask about your symptoms and medical history, and perform a physical exam.

Talk to your doctor about the best treatment plan for you. Options include:

Your doctor may give you medicine to dissolve small stones. You may need to take medicine for months or even years.

Another procedure that may be used to treat gallstones is called endoscopic retrograde cholangiopancreatography (ERCP). ERCP uses a combination of endoscopy and x-rays to locate and remove gallstones before or during gallbladder surgery.

To reduce your chance of getting gallstones: