This is a series of x-rays of the esophagus, stomach, and duodenum (the first part of the small intestine). Together, the esophagus, stomach, and duodenum are called the upper gastrointestinal (GI) tract, or upper digestive system. The x-rays are taken during and after drinking a chemical called barium. The barium solution is a thick, white, chalky, milkshake-like liquid. It coats the inside lining of your GI tract. This makes the GI tract show up better on the x-ray. 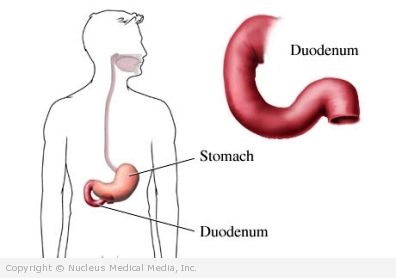 An upper GI series may be done if you have:

Upper gastrointestinal series – What to Expect

You will remove all jewelry and wear a hospital gown. You will drink the barium solution. As you drink the barium, the radiologist will take x-rays of your chest and abdomen. The doctor may also give you bits of food to eat with barium on them. You may have to change positions frequently during the test.

If your doctor wants to look at more of your intestines, a small bowel follow-through may be done. This means that x-ray pictures are taken every 15-30 minutes while the barium travels further down the intestines.

You may eat and drink as usual. Drink plenty of fluid. The barium will slowly pass through your system on its own.

You may have some white-colored stool or constipation after the test.

Upper gastrointestinal series – How Long Will It Take?

An upper GI series can take between 30 minutes and two hours. A small bowel follow-through can take 1-4 hours.

Upper gastrointestinal series – Will It Hurt?

A normal upper GI series will show a functioning, healthy digestive tract. Your doctor will perform further tests or make a treatment plan based on the findings.

After the test, call your doctor if any of the following occurs: