Cystic fibrosis (CF) is an inherited disease. The defect occurs in epithelial (lining) cells. These cells normally create a mucus. The mucus is a vital tool for many organs. CF causes the cells to produce a very thick and rubbery mucus. This most commonly causes: 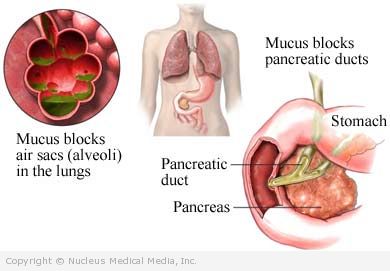 CF is an autosomal recessive disorder. This means the child inherits one defective gene from each parent. Usually the parents do not have the disease but carry the gene. These parents are called carriers.

Factors that increase your chance of CF include:

The abnormally thick mucus of CF blocks certain organs. This causes many of the symptoms of CF.

CF is a serious life-long condition. It significantly reduces longevity. It also results in illness and poor health for most. Girls tend to be affected more severely than boys. The severity of illness can vary greatly. The average life expectancy is about 35 years. Some persons with mild forms of CF can live to age 60 or beyond.

The doctor will ask about symptoms and medical history. A physical exam will be done. CF is suspected in a child with classic symptoms, especially if a sibling has CF.

There is no cure for CF. Treatment is aimed at:

Researchers are exploring gene therapy. This may slow the progression of CF or even cure it.

If you or your child is diagnosed with CF, follow your doctor’s instructions.

If you have the defective genes, there is no way to prevent CF.

Adults can be tested to see if they carry the genes before having children. Prenatal testing can determine if a baby will have CF. The availability of this testing raises many important ethical questions.