Barrett’s esophagus is a complication of chronic esophagitis, which is inflammation of the esophagus. 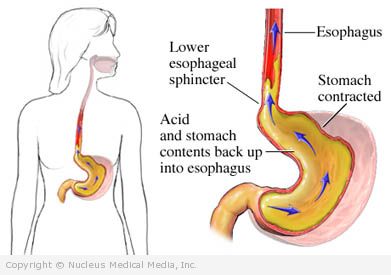 Although Barrett’s esophagus does not directly produce symptoms, people with GERD may experience the following:

Once the cell changes of Barrett’s esophagus occur, the changes are permanent. The goal of treatment is to prevent further damage by stopping the reflux of acid from the stomach. Treatment may include:

The following types of medicines may be prescribed:

If the disease is severe or the medicine is unsuccessful, your doctor may recommend surgery. Surgical options may include:

Your doctor may recommend endoscopy about (or at least) every 1-3 years to monitor the esophagus for early signs of cancer. This recommendation must be individualized for each person.

The best way to prevent Barrett’s esophagus is to minimize and/or treat the reflux of stomach acid into the esophagus, which is usually due to GERD. In addition to drugs or surgery, self-care measures for GERD include: