Albinism refers to a group of rare inherited disorders that are present from birth. Albinism affects the amount of pigment found in the skin, hair, and eyes. People with albinism usually have little to no pigment in their eyes, skin, and hair, but the degree of pigment loss can be quite variable. There are four types of Albinism:

Albinism occurs as a result of altered genes. In most cases these genes are inherited from parents. It may be autosomal recessive or X-linked.

Autosomal recessive inheritance accounts for the vast majority of cases. This means that both parents carry one copy of an abnormal gene but do not have symptoms or signs of albinism. Children become affected only if they inherit one affected gene from each parent. In this form of inheritance, each child has a one-in-four chance of inheriting the condition. The abnormal gene reduces (or completely eliminates) the body’s ability to make a pigment called melanin. There are several dozen different genetic subtypes of albinism. Individuals can have full or partial absence of this pigment which will affect the color of eyes, hair, and skin.

Albinism is a hereditary disorder. Therefore, people at risk of inheriting albinism are:

Albinism is rare. In the United States, about 1 in 17,000 individuals overall has some form of albinism. All races are affected, though Type 1 occurs predominantly in whites and Type 2 in blacks. Most children with albinism are born to parents with normal hair and skin color for their ethnic background. 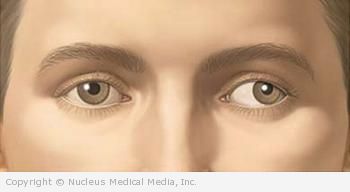 While albinism is always apparent at birth, it may be so mild that affected persons are unaware of their diagnosis unless abnormal eye movements or vision develop.

There is no cure for albinism. Treatment is aimed at preventing or limiting symptoms. In some cases, specific treatment for certain symptoms is needed.

Preventive treatment may include:

Specific treatment of symptoms for albinism may include:

These treatments may be of special importance in Africa where the World Health Organization estimates that thousands of affected individuals live without access to important medical and preventive care.

Studies in mice with genetic forms of albinism suggest that gene transfer may prevent visual disturbances. Whether these results may someday be applied to people with ocular albinism remains to be seen.

There is no known way to prevent albinism. If you have albinism or have a family history of the disorder, you can talk to a genetic counselor when deciding to have children to understand the risks to your offspring.