There are many types of soft tissue sarcoma, including: alveolar soft part sarcoma, angiosarcoma, dermatofibrosarcoma protuberans, desmoid sarcoma, fibrosarcoma, leiomyosarcoma, liposarcoma, malignant fibrous histiocytoma, lymphoma (lymphosarcoma), malignant peripheral nerve sheath tumor, rhabdomyosarcoma, and synovial sarcoma. Treatment will differ depending on the type of cancer and the location and size of the tumor.

Cancer occurs when cells in the body (in this case, soft tissue cells) divide without control or order. Normally, cells divide in a regulated manner. If cells keep dividing uncontrollably when new cells are not needed, a mass of tissue forms, called a growth or tumor. The term cancer refers to malignant tumors, which can invade nearby tissues and spread to other parts of the body. A benign tumor usually does not invade or spread. 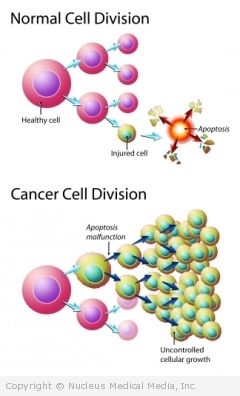 The exact cause of soft tissue sarcoma is not known.

In the early stages, a sarcoma is small and does not produce symptoms. As the tumor grows, it may push aside normal body structures, causing symptoms.

The most common symptom of a sarcoma is a lump or swelling that may or may not be painful. Symptoms vary, depending on the part of the body that is affected. For example, tumors found in the following areas of the body may develop these symptoms:

The doctor will ask about your symptoms and medical history, and perform a physical exam. The doctor may decide to order an x-ray or other tests if a tumor is suspected. However, the only way to confirm the diagnosis is with a biopsy. A biopsy is the removal of a sample of tissue from the affected area to be tested for cancer cells.

Once a sarcoma is found, staging tests are performed to find out if the cancer has spread and, if so, to what extent. Treatment depends on the stage of the cancer as well as the type.

Surgery requires removal of the cancerous tumor and nearby tissue, and possibly nearby lymph nodes.

Radiation therapy (or radiotherapy) is the use of radiation to kill cancer cells and shrink tumors. When a sarcoma is aggressive looking, the surgeon will remove as much of it as possible. Adding radiation will significantly reduce the chances of the cancer coming back. Radiation may be:

Chemotherapy is the use of drugs to kill cancer cells. Chemotherapy may be given in many forms including: pill, injection, or by catheter. The drugs enter the bloodstream and travel through the body killing mostly cancer cells, but also some healthy cells. Chemotherapy is generally reserved for only certain types of sarcomas, such as an osteosarcoma (where chemotherapy is a standard offer and contributes significantly to cure) or when the sarcoma has spread to other parts of the body (metastatic disease), wherein the treatment is designed to slow the pace of the disease but is not considered a curative.

There are no guidelines for preventing soft tissue sarcoma because the exact cause is unknown.