Scarlet fever is a bacterial infection that produces a sore throat, upper respiratory symptoms, and a characteristic rash. It was once a serious childhood ailment, but it is quite treatable today with antibiotics. 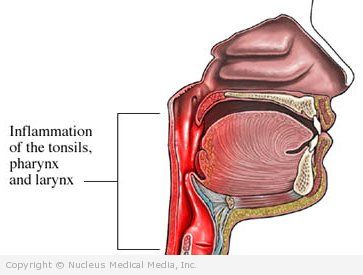 Scarlet fever is caused by Group A beta-hemolytic Streptococcus pyogenes. This type of bacteria produces a toxin that causes a rash. Scarlet fever usually develops in conjunction with strep throat.

The first signs of strep throat are:

If strep is diagnosed and treated with antibiotics, the infection may progress to scarlet fever.

Scarlet fever has a characteristic rash. Small red spots usually appear on the neck and chest within 24-48 hours after onset of the illness. This rash will spread quickly over the body to the abdomen, arms, and legs. The rash feels rough, like sand paper, and the redness blanches with pressure. There may also be flushing in the face with paleness around the mouth. Elbows, underarms, and other body crease areas may show red streaks called “Pastia’s lines.” In 7-10 days, the rash will peel off.

The doctor will ask about your symptoms and medical history, and perform a physical exam. The doctor will swab the back of your throat for testing. The sample may be sent to a lab for a throat culture or a rapid strep antigen test (“rapid” strep test) may be done in the office.

Scarlet fever can be treated with an antibiotic, such as penicillin or amoxicillin. It is usually taken for about 10 days. Erythromycin or azithromycin can be used for those with penicillin allergy. It is important to take all the prescribed medication to prevent recurrence or complications. People with an active strep infection are usually contagious until the antibiotic has been taken for at least 24 hours.

In rare cases, untreated strep throat infection may cause:

Steps to prevent scarlet fever include: