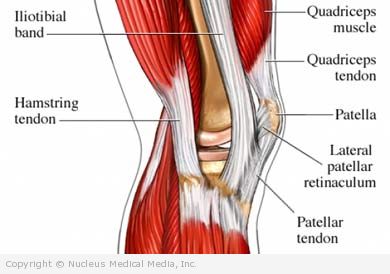 ITBFS is caused by repetitive friction or rubbing of the iliotibial band against the bone on the outer side of the knee. This excessive rubbing can irritate the ITB itself and/or the underlying tissue.

Causes of the excessive friction include:

Risk factors for developing ITBFS include:

The pain may be localized. It generally radiates around the outside of the knee and/or up the outside of the thigh. Pain typically starts as minor discomfort. It can then worsen progressively. Snapping, creaking, or popping may be present when the knee is bent and then straightened. There is usually no swelling.

The doctor will ask about your symptoms and medical history. A physical exam will be done. Diagnosis is based on these factors:

Treatment depends on the cause.

Avoiding the causes of ITBFS is the best way to prevent it. This can include: