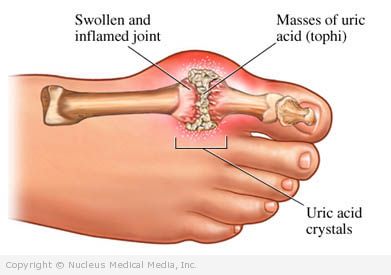 Gout typically occurs if you have high levels of uric acid in your blood (called hyperuricemia). But, you could also have normal uric levels and still have gout.

The liver metabolizes uric acid, and the kidneys get rid of it through the urine. Levels of uric acid build up when:

If you have gout and hyperuricemia, your body doesn’t eliminate enough uric acid.

These factors increase your chance of developing gout. All causes of hyperuricemia are risk factors for gout.

Most people with gout have another attack within two years. This attack may affect many different joints. With recurrent gout, tophi can form. Tophi are chalky deposits of uric acid that commonly occur in the elbows and earlobes.

The doctor will ask about your symptoms and medical history, and perform a physical exam. A sample of fluid from the affected joint will be taken. This fluid will be tested for uric acid crystals.

Other tests may include:

Treatment depends on whether the gout is acute or recurrent.

In general, the sooner treatment begins for an acute attack, the more effective it is. Treatment depends on:

Putting a warm pad or an ice pack on the joint may ease the pain. Keeping the weight of clothes or bed covers off the joint can also help.

If you have recurrent gouty arthritis or an initial attack with hyperuricemia, you may be given medication:

In some cases, low-dose colchicine may also be used to prevent recurrent attacks.

If you are diagnosed with gout, follow your doctor’s instructions.

To reduce your chance of getting gout: