Chickenpox is a viral infection. It is highly contagious. It creates a widespread itchy rash. In some, the infection can also cause serious complications. The infection is more dangerous for adults and newborns. It is also a danger for people with suppressed immune systems. 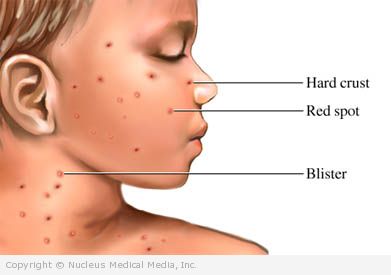 Chickenpox is caused by the varicella zoster virus (VZV). It spreads from person to person via:

It is contagious 1-2 days before the rash erupts. It remains so until all of the blisters have crusted five days later. It is most contagious just after the rash has broken out.

A pregnant mother can transmit virus to fetus.

Factors that increase your chance of getting chickenpox include:

Symptoms break out about 10-21 days after contact. They are more severe in adults than they are in children.

The rash appears within 1-2 days after the first symptoms. The rash will:

The doctor will ask about your symptoms and medical history. A physical exam will be done. Diagnosis is usually made on the basis of age and the rash. Blood and lab tests to identify the virus are rarely needed.

In most people, chickenpox is mild. It will naturally run its course. In these cases, treatment focuses on relieving the symptoms.

Antibiotics can not cure infections caused by a virus. They may be given if the rash becomes infected with bacteria.

The course, severity and duration of the infection may be reduced by antiviral medications such as:

They are often used in:

Varicella-zoster immune globulin is often given immediately after exposure. It is reserved for newborns and people with weak immune systems.

Avoid contact with anyone who has chickenpox. This is very important if you have not been vaccinated against the infection.

The varicella vaccine or a combination vaccine called MMRV (protects against measles, mumps, rubella, and varicella) is recommended for most children.

There is a “catch-up” schedule if your child has missed the routine injections.

Adults who have never received the varicella vaccine or have never had chickenpox should also be vaccinated.

If you or your child has not been vaccinated but has been exposed to chickenpox, a vaccine given right away may help lessen the severity of the infection or prevent it.