Deafness means a lack or loss of the sense of hearing, which may be partial or complete. Partial loss of hearing is often called hearing loss rather than deafness. Deafness can occur in one or both ears.

There are three primary types of hearing loss: 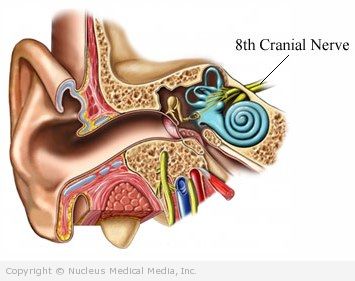 Deafness may occur at any age, from birth through old age.

The conditions that can cause or be associated with hearing loss include the following:

A risk factor is something that increases your chance of getting a disease or condition. Risk factors for deafness include:

Hearing loss usually comes on gradually, but may come on suddenly. Symptoms may include:

Symptoms of deafness in infants may be noted at these stages:

According to the American Academy of Pediatrics, all children (including newborns) should be screened for hearing loss so that hearing loss occurring before birth can be uniformly detected prior to three months of age.

Your doctor will ask about your symptoms and medical history, and perform a physical exam. As part of the diagnosis, your doctor may try to determine the following:

Depending on the type of hearing loss you have, the doctor may order tests to confirm your diagnosis. Tests may include:

Treatment for deafness depends on the type of hearing loss. Options may include:

To help prevent deafness, avoid loud noise. In cases when loud noise cannot be avoided, you can reduce exposure to loud noises by wearing earplugs, earmuffs, or ear protectors. Also, taking steps to reduce injuries or disease may prevent certain types of deafness.

There is currently no effective way to prevent congenital or genetic deafness. Hearing screening for newborns can help insure that hearing loss in young babies is detected and treated at the earliest possible stage.