Vascular dementia is a cause of dementia. It is caused by disease of the small blood vessels in the brain. Parts of the brain called white matter (as well as subcortical grey matter) are injured by multiple small strokes. 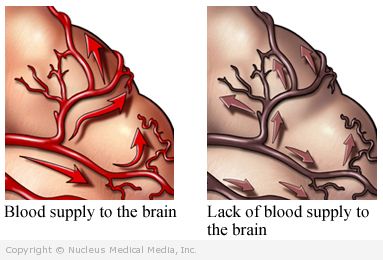 Vascular dementia occurs when cells below the surface of the brain (the cortex) receive an inadequate supply of oxygen and nutrients and, in turn, die. This process is due to hardening of the blood vessels within the white matter of the brain, which affects the blood supply. As a result, the oxygen and nutrient supply to the neurons and their supporting cells are also affected.

The exact cause is unknown. However, factors that play a role in causing the disease include:

In some patients, symptoms appear suddenly with neurologic changes like those caused by a stroke. Sometimes, the small strokes that lead to vascular dementia can happen without other symptoms. This makes the condition difficult to detect.

In some cases, symptoms may stabilize or even improve. However, in most patients, the disease continues to progress.

The main symptoms of vascular dementia include:

Other symptoms that may be present include:

The symptoms of vascular dementia can resemble other causes of dementia, such as Alzheimer’s disease.

Your doctor will ask about your symptoms and medical history. A physical exam will also be done. Tests may include:

There is no known cure for vascular dementia. Minimizing risk factors and alleviating symptoms are important in trying to slow disease progression and improve quality of life.

Medicines can be given to help limit or control symptoms and possibly slow progression of the disease. These include:

There are no definitive guidelines for the prevention of vascular dementia. However, the following may help reduce your risk: