Cancer occurs when cells in the body (in this case a type of white blood cell called lymphocyte) divide without control or order. If cells keep dividing uncontrollably when new cells are not needed, a mass of tissue forms, called a growth or tumor. The term cancer refers to malignant tumors, which can invade nearby tissue and can spread to other parts of the body. A benign tumor does not invade or spread. 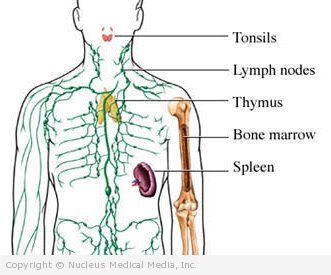 The cause of Hodgkin’s lymphoma is unknown. It is likely related to complex genetic and environmental factors that lead to alteration of the immune system. There are some compelling pieces of data to suggest that it is caused by a virus, and the Epstein-Barr virus (EBV) has been considered.

The doctor will ask about your symptoms and medical history, and perform a physical exam. In particular, the doctor will carefully examine your lymph nodes. Most enlarged or swollen lymph nodes result from infection, not lymphomas. If infection is suspected, you may be given medication and instructed to return for re-examination.

If swelling persists, your doctor may order a lymph node biopsy. The biopsy results will show whether there is cancer, and if so, the type and extent of the cancer that is present.

Treatment of Hodgkin’s disease depends on the stage of the disease: how far the cancer has spread and what organs are affected. In general, this means that staging tests to evaluate the condition of the lymph nodes in the body, the liver, spleen, and bone marrow must be done.

Hodgkin’s lymphoma is generally considered one of the more curable forms of cancer. Treatment options include:

Chemotherapy is the use of drugs to kill cancer cells. Chemotherapy may be given in many forms including: pill, injection, and via a catheter. The drugs enter the bloodstream and travel through the body killing mostly cancer cells, but also some healthy cells.

In radiation therapy, radiation is directed at the tumor from a source outside the body to kill the cancer cells.

In many cases, both chemotherapy and radiation are used to cure a patient of Hodgkin’s lymphoma. The choice of treatments will be based on:

If the cancer does not respond to chemotherapy or radiation, the outcome is usually very poor. There are some treatment options available, including:

Splenectomy is the surgical removal of the spleen, an organ that is part of the lymphatic system. In some cases, the doctor may recommend a splenectomy in people who have lymphoma.

There are no guidelines for preventing Hodgkin’s lymphoma because the cause is unknown.