Gilbert’s syndrome is a common, benign genetic liver disorder. It causes levels of bilirubin to rise above normal levels. Bilirubin is a yellow chemical by-product of hemoglobin (the red pigment in blood cells) and is usually excreted by the liver as bile.

Gilbert’s syndrome is found in 3%-7% of the US population, affecting up to 10% of some Caucasian populations. This condition usually manifests during the teen years or in adulthood years (ages 20-30). 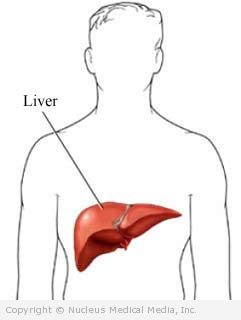 Gilbert’s syndrome is usually caused by an inherited genetic abnormality. Symptoms occur when there is an interference with the liver enzyme that is important in the elimination of bilirubin. This causes the levels of bilirubin to increase in the blood, which may produce symptoms such as jaundice.

A risk factor is something that increases your chance of getting a disease or condition. The risk factors for Gilbert’s syndrome are:

Often, there are no symptoms of Gilbert’s syndrome. However, people who do have symptoms may experience:

Your doctor will ask about your symptoms and medical history and perform a physical exam. Tests may include:

No treatment is necessary for Gilbert’s syndrome. Usually, symptoms will disappear on their own.

There is no way to prevent Gilbert’s syndrome. However, you may prevent symptoms by avoiding the following: