The nasal septum is the wall that separates the left and right nostrils. A centered septum allows air to flow equally through each nostril. In a deviated nasal septum the wall is not centered.

A deviated septum may cause no symptoms at all. In severe cases, airflow through one or both nostrils may be blocked. A blocked nostril may cause chronic stuffiness and a tendency to get sinus infections. 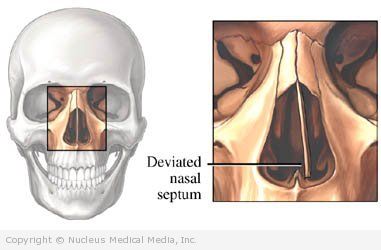 The doctor will ask about your symptoms and medical history. A physical exam will be done. The doctor will examine the nasal passages. A nasal speculum will hold the nose open. A thin telescope is passed into the nose.

Most people will not require treatment. In severe cases, surgery may be needed. Surgery on the septum alone is called septoplasty. It relieves nasal blockage by centering the septum between the two nostrils.

Sometimes surgery to reshape the nose ( rhinoplasty) is performed at the same time. The two procedures together are called septorhinoplasty. Children who need surgery usually wait until they’ve stopped growing, around age 16.

To help prevent a deviated septum: