Contractures refer to the permanent tightening of non-bony tissues, such as muscles, tendons, ligaments, or skin. The result is a loss of motion in the affected joints.

Contracture is different than spasticity, but they are often related. Spasticity is an abnormal increase in muscle tone. This can worsen the development of contractures. 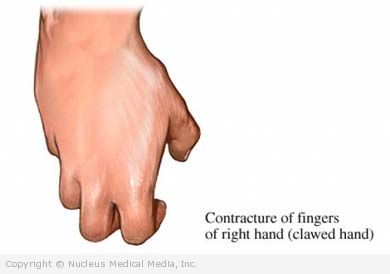 Contractures may be caused by abnormalities of the structures surrounding a joint. These include:

Contractures are often also associated with spasticity resulting from injuries to the central nervous system.

A risk factor is something that increases your chances of getting a disease or condition.

Each of these conditions increases the risk for contractures:

The primary symptom is loss of motion in a joint. Pain can also be a major symptom.

The doctor will ask about your symptoms and medical history. Your joints will be examined for restricted movement and range of motion. X-rays may be taken as well.

Maintaining and improving range of motion is most important. Physical modalities can also be used. For example, ultrasound is often used for large joint contractures. Physical therapy helps to increase mobility, joint elasticity, and muscle strength. Some people also benefit from therapeutic massage.

Casts or splints help stretch the soft tissues surrounding the affected joint and can keep them in a more functional position. This method is often used when contractures are caused by nerve injury or immobility. Casts need to be changed regularly to reassess the joint position and avoid skin breakdown.

Medications to treat spasticity may help in the rehabilitation of contractures.

In cases of severe spasticity, nerves to the affected muscles can be temporarily numbed with anesthetics. Alternatively, opposing muscles can be electrically stimulated. These actions can change the balance of forces across a joint. This therapy is often done with casting.

Surgery may be necessary to release affected tendons, ligaments, and joints. This may be done for severe cases or for contractures unresponsive to other treatments.

Prevention of contractures depends on the cause. After acute injuries or orthopedic surgery, contractures may be prevented by:

Aggressive medical treatment of inflammatory conditions such as rheumatoid arthritis may also delay or prevent contractures.