Skin cancer is a disease in which cancer cells grow in the skin.

The two most common kinds of skin cancer are: 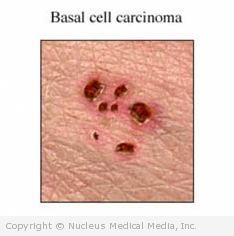 Cancer occurs when cells in the body (in this case, skin cells) divide without control or order. Normally, cells divide in a regulated manner. If cells keep dividing uncontrollably when new cells are not needed, a mass of tissue forms, called a growth or tumor. The term cancer refers to malignant tumors, which can invade nearby tissues and spread to other parts of the body. A benign tumor is unable to invade or spread.

It is important that skin cancers be found and treated early because they can invade and destroy nearby tissue. Another type of cancer that occurs in the skin is melanoma. There are also rare forms of skin cancer such as merkel cell carcinoma, sebaceous carcinoma, and eccrine carcinoma.

Actinic keratosis is a precancerous lesion. It is caused by accumulated exposure to ultraviolet radiation from the sun. If left untreated, it may progress to squamous cell carcinoma (which occurs approximately 10% of the time).

Skin cancers are rarely painful. The most common first symptom of skin cancer is a change in the skin, such as a new growth or a sore that doesn’t heal. When it starts, skin cancer may appear as:

Skin cancers are found mainly on areas exposed to the sun:

However, skin cancer can occur anywhere.

These symptoms may also be caused by other, less serious health conditions. A person experiencing these symptoms should see a doctor if they last for more than two weeks.

The doctor will ask about your symptoms and medical history, and perform a physical exam. If you have a growth like those listed above, your doctor may treat it in the office. This involves removing all or part of the lesion and sending it to the laboratory for a biopsy.

In cases where the growth is very large or has been present for a long time, the doctor will carefully check the lymph nodes in the area. You may also need to have more tests to find out if the cancer has spread to other parts of the body.

Treatment for skin cancer usually involves surgery. In some cases, radiation therapy or chemotherapy may be used. Sometimes a combination of methods is used.

Many skin cancers can be cut from the skin quickly and easily. In fact, the cancer is sometimes completely removed during biopsy, and no further treatment is needed. Surgical techniques include:

This involves scooping the cancer out with a curette (an instrument with a sharp, spoon-shaped end). The area is treated with an electric current to control bleeding. This also kills any cancer cells remaining around the edge of the wound. This technique is used for very small or superficial cancers in noncosmetically vital areas.

Mohs’ surgery involves the removal of all of the cancerous tissue. The surgeon will try to remove as little healthy tissue as possible. This method is used to remove:

The procedure is performed by specially trained dermatologic Mohs surgeons. The cancer is shaved off one thin layer at a time. Each layer is checked under a microscope for cancer cells until the entire tumor is removed. This method offers the highest chance of a cure.

For this treatment, a surgical knife is used to cut out the lesion.

Liquid nitrogen is used to freeze and kill the abnormal cells. After the area thaws, the dead tissue falls off. More than one freezing may be needed to remove the growth completely. This method may be used to treat precancerous skin conditions (actinic keratoses) and certain small or superficial skin cancers.

Laser therapy uses a narrow beam of light to remove or destroy cancer cells. This method is sometimes used for cancers that involve only the outer layer of skin.

Topical chemotherapy is the use of drugs, in the form of cream or lotion, to kill cancer cells. This method is successful in treating precancerous conditions and cancers limited to the outer layer of the skin. The most common topical chemotherapy used is a form of 5-fluorouracil (5-FU) or imiquimod cream.