Rickets (in children) and osteomalacia (in adults) are two forms of a metabolic bone disease resulting from vitamin D deficiency. Both cause softening and weakening of bones because of defective or inadequate bone mineralization. 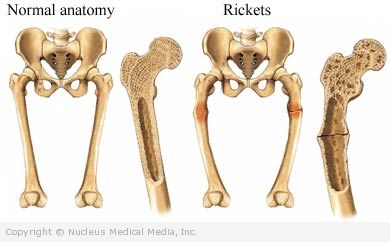 Rickets and osteomalacia result when there is a vitamin D deficiency in the body. This may occur when:

Vitamin D regulates calcium absorption in the body. It also controls levels of calcium and phosphate in bone. Vitamin D is absorbed in the intestines from food. Vitamin D is also produced by the skin during exposure to sunlight.

Most often, rickets and osteomalacia are caused by a deficiency of vitamin D. This can result from:

Less often, rickets and osteomalacia can be caused by other disorders that affect vitamin D absorption, metabolism, or action in the body such as:

A risk factor is something that increases your chance of getting a disease or condition. Risk factors for rickets/osteomalacia include:

The doctor will ask about your symptoms and medical history, and perform a physical exam. Tests to confirm the diagnosis may include:

Correct the underlying cause

Treating the Underlying Cause

Treatment of the underlying cause may include:

Treatment to relieve or correct symptoms may include:

To help prevent rickets or osteomalacia: