Moles are spots on the skin where pigmented cells have clustered together. They typically appear as light to dark brown spots on the skin that are either flat or raised. Most people have benign moles, which are harmless.

Moles that become atypical (called dysplastic nevi) might eventually become melanoma. Melanoma is a form of skin cancer. Moles that change or look atypical need to be evaluated by your doctor or a dermatologist. 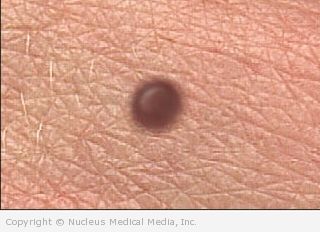 Moles develop from pigment-producing cells in the skin called melanocytes. Normally, these cells are evenly distributed in your skin. When you have a mole, it is because these cells form a cluster.

These factors increase your chance of developing moles:

Most people have some benign moles that appear at birth, childhood, or adolescence. Most adults have 10-40 moles.

Benign moles, which can appear anywhere on the body, are usually:

Signs that a mole may be atypical include:

If you are concerned about a mole because it looks different from the others, or you are over age 30 and notice a new mole, call your doctor. Also call your doctor if you notice any signs that an existing mole may be atypical. 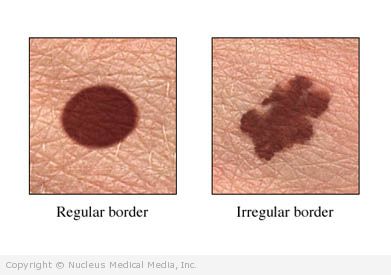 The doctor will examine your skin and ask about your symptoms and medical history.

Benign moles do not need to be treated. However, surgery may be done to remove those that are unsightly or irritated.

Treatment for atypical moles include monitoring or removal. Atypical moles that are cancerous or suspected of being cancerous can be removed. The mole tissue is examined under a microscope. If cancer cells are found, more surgery is done to remove any remaining portion of the mole and surrounding tissue.

Have moles removed if your doctor recommends it.