A mechanical bowel obstruction is a partial or complete blockage in the intestine, which is also called the bowel. Blockages can occur at any point along the small or large bowel. They are more common in the small bowel. When the bowel is blocked, food and liquid cannot pass through. Over time, food, liquid, and gas build up in the area above the blockage. This can cause abdominal pain and swelling. 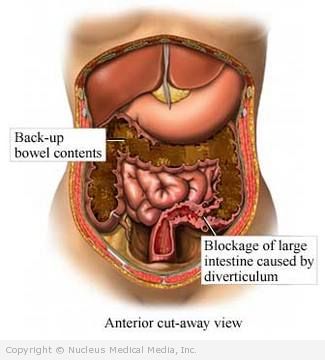 Most small bowel blockages are due to adhesions. An adhesion is a band of scar tissue that causes the bowel to attach to the abdominal wall or other organs. Most large bowel obstructions are caused by tumors.

Specific causes of bowel obstructions include:

A risk factor is something that increases your chance of getting a disease or condition. Risk factors for a bowel obstruction include anything that is likely to cause scar tissue or a blockage, such as:

Symptoms of a bowel obstruction include:

Complications from an untreated obstruction can include strangulation, which is cutting off of the blood supply to part of the intestine.

Your doctor will ask about your symptoms and medical history and perform a physical exam. Your doctor will place a stethoscope on your abdomen to listen for bowel sounds. If the normal bowel sounds are absent, or if high pitched, tinkling sounds are present, it may be an indication of bowel obstruction. Further testing may include:

Bowel obstructions can be serious, even fatal. If your doctor thinks you may have a bowel obstruction, you will be hospitalized and treated. Your treatment will depend on what part of your bowel is blocked and what is causing the blockage.

Possible treatments include the following:

During surgery, the blocked part of the bowel may be removed. The remaining sections will then be joined together. You will probably need a nasogastric tube temporarily after surgery. In addition, you may need antibiotics and pain medication during recovery.

If you are diagnosed with a mechanical bowel obstruction, follow your doctor’s instructions.