Lung cancer is a disease in which cancer cells grow in the lungs.

There are two types of lung cancers: 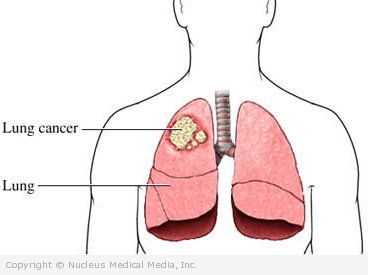 The following can cause damage to the cells in the lungs, leading to lung cancer:

These factors increase your chance of developing lung cancer:

Once lung cancer is found, staging tests are done to find out if the cancer has spread. The goal of treatment is to eliminate the cancer and/or control symptoms.

Surgery involves removing the tumor and nearby tissue. Lymph nodes may also need to be removed. The type of surgery depends on the location of the tumor, such as:

Radiation therapy is the use of radiation to kill cancer cells and shrink tumors. This may also be used to relieve symptoms, such as shortness of breath. Radiation may be:

Chemotherapy is the use of drugs to kill cancer cells. This may be given in many forms, including pill, injection, and via a catheter. Chemotherapy is often used to kill lung cancer cells that have spread to other parts of the body.

These two types of treatments are not yet widely used. The National Cancer Institute considers these potential therapies:

If you are diagnosed with lung cancer, follow your doctor’s instructions.

To reduce your risk of getting lung cancer:

The American Lung Association and American Cancer Society both suggest that screening for lung cancer with a type of CT scan may be considered if you are a smoker (or former smoker), aged 55-74 years, and have a history of heavy smoking (eg, one pack a day for 30 years).