This condition results from reduced iron stores in the blood. This happens when you do not eat enough iron to replace the iron that your body uses. Your body uses iron to produce hemoglobin. This part of red blood cells carries oxygen to tissues and muscles. Bleeding a lot can also cause anemia. 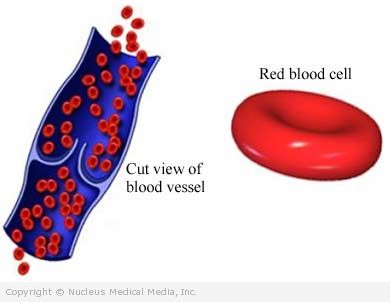 Factors that play a role include:

These factors increase your chance of developing this condition. Tell your doctor if you have any of these risk factors:

While most people with mild anemia have no symptoms, when present, symptoms may include:

The doctor will ask about your symptoms and medical history, and perform a physical exam.

Iron can be taken as a supplement or as part of a multivitamin. Iron comes in many “salt” forms. Ferrous salts are better absorbed than ferric salts. Ferrous sulfate is the cheapest and most commonly used iron salt. Slow-release or coated products may cause less stomach problems. However, they may not be absorbed as well. Some products contain vitamin C to improve absorption. Talk to your doctor, though, because your iron level could get too high.

Your doctor may recommend that you feed your baby iron-fortified cereal.

To help reduce you or your child’s chances of getting this condition, take the following steps: