Dupuytren’s contracture is a thickening and shortening of the fascia in the palm of the hand. The fascia is a firm tissue that lies just below the skin. This condition causes affected fingers to curl towards the palm and makes extension of these fingers difficult or impossible. 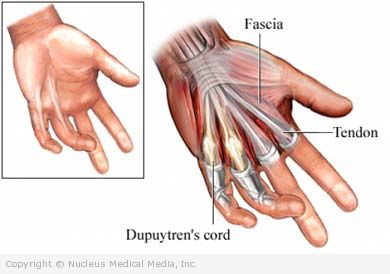 The exact cause of Dupuytren’s contracture is unknown. For some people, the condition is inherited.

At first, symptoms are mild, but they may become progressively worse. The rate of progression varies among people.

The ring finger is usually affected first, followed by the little finger, then the index, and long finger. Fingers on either or both hands can be affected. The first sign of this condition is a nodule in the palm near the base of a finger. A nodule is a small thickening of the fascia under the skin. In some cases, nodules can be sensitive to touch. Generally, though, this condition is not painful.

As a contracture progresses, the nodule becomes a thickened fibrous cord that extends into the finger under the skin. As the cord thickens and shortens, the affected finger is pulled (curled) in towards the palm. It becomes difficult or impossible to extend the finger.

The doctor will ask about your symptoms and medical history. A hand examination will be done. In some cases, x-rays may be taken as well.

No treatment is necessary when symptoms are mild and do not effect normal use of the hand. In other cases, treatment may include:

Surgery is most effective when the condition is still in the nodule stage.

Depending on how far the condition has progressed, surgery may involve:

This is usually needed to restore full range of motion and use of the repaired finger(s).

Dupuytren’s contracture can recur after surgery.

Injecting corticosteroids into nodules during early stages of the condition can sometimes:

Another medicine that can be injected is called collagenase clostridium histolyticum (Xiaflex). This biologic drug breaks down the thickened tissue in the hand.

If you are diagnosed with Dupuytren’s contracture, follow your doctor’s instructions.

There are no guidelines to prevent Dupuytren’s contracture. Its cause is unknown. However, treatment is made easier and more effective with early detection.