An ovarian cyst is a fluid-filled sac in the ovary. During the menstrual cycle, it is normal for a cyst to develop. Most cysts are small and benign (not cancerous) and go away on their own. Larger cysts can cause pain and other problems. 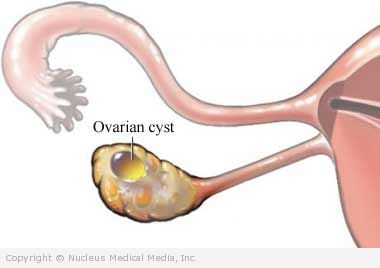 Follicles grow in the ovaries each month during childbearing years. Each month, in an ovary, at least one egg matures in its follicle. The egg and follicle become a small functional cyst. It makes hormones and during ovulation will release an egg. In some cases, these follicles may enlarge enough to become cysts. They are also known as functional cysts. There are two main types:

Other, less common types of benign cysts can also form from ovarian tissue:

In a small number of cases, some cysts undergo cancerous changes. The doctor will carefully examine each cyst.

All women who still have monthly menstrual cycles are at risk for developing cysts.

Most ovarian cysts do not cause symptoms. In some cases, though, a cyst may become twisted. This can cause pain in the lower abdomen. Some cysts may also rupture releasing fluid into the abdomen. This fluid can irritate the lining of the abdomen and cause pain. The pain may be on one or both sides of the lower abdomen. Also, large cysts may cause a sensation of pressure in the abdomen. Cysts can also cause urinary or bowel problems if they press on the bladder or bowel.

The doctor will ask about your symptoms and medical history. A pelvic exam will also be done. Cysts are often found during routine pelvic exams when there are no symptoms.

If a cyst is suspected or found, the doctor may do a pelvic ultrasound to determine the:

Other tests or procedures (eg, laparoscopy, blood tests) may be used if a cyst:

Treatment depends on factors like your age, menstrual status, characteristics of the cyst, and your symptoms.

In some cases, the doctor takes a “wait and see” approach to see if the cyst will go away on its own.

If treatment is needed, options may include:

Laparoscopic surgery (minimally invasive approach) may be recommended to remove a cyst if it:

While there are not clear ways to prevent cysts from forming, you can take steps to take care of yourself by: