Malaria is a disease passed through the blood. It is caused by a parasite. The parasite is typically passed to humans through the bite of an infected mosquito.

Malaria is caused by one of the following four types of parasites:

An Anopheles mosquito becomes infected when it bites someone with malaria. Another bite will pass the malaria to a new person.
Malaria can be passed from a mother to her unborn child. It can also be passed through a blood transfusion from an infected donor.

Plasmodium falciparum is by far the most dangerous form of malaria. In most areas, it is also the most common form. 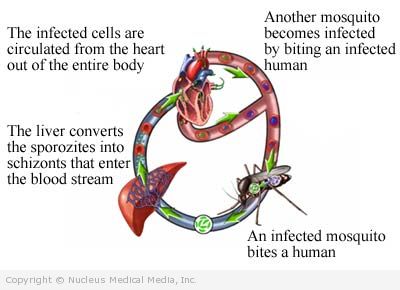 Risk factors that increase your chance of malaria include:

Once inside the bloodstream, parasites travel to the liver. There they multiply (hepatic phase). During this phase, the infected person has no symptoms.

Without treatment, the cycle of red blood cell destruction and fever will continue. This can lead to death.

Symptoms usually begin within 10 days to four weeks after being bitten by an infected mosquito. P. malariae may not produce symptoms for a year or more. P. falciparum infections tend to cause more severe symptoms with higher death rates.

The doctor will ask about your symptoms, medical history, and travel history. A physical exam will be done. You will have blood tests done.

Prescription drugs are used to treat malaria. They kill the parasites. The choice of an antimalarial agent depends on:

The following medications are used alone or in combination:

Many of these medicines are used to treat resistant strains of P. falciparum.

To reduce your chance of getting malaria when in an area where malaria is prevalent: